Chris Free has been round the block, possibly more times than he’s had hot dinners. Co-writer and guitarist of The Users in the late 70s, resident on Paul Weller’s Respond Records with A Craze (and co-writing Tracie Young’s ‘Give It Some Emotion’) and much more since, including continual outputs under The Sound Of Pop Art psyche-pop musical purveyors.

Under his own name with this EP, Chris pulls in a little help from friends – Andy Lewis (Paul Weller, Fay Hallam, The Catenary Wires, etc), Toby Kinder (The Gene Drayton Unit, Tiny Flaws, French Boutik), Sara Onyett (TSOPA, The Cherry Orchard) amongst others too, with Andy Lewis also taking on the producer duty.

A Mad Affair EP provides four Summer-Autumn vibes, setting up a fine, quintessential English scene, pushing across the horizon of blue sky and the finest greenery all the way up to the toes. Side 1’s ‘Rosemary Jane’ takes the psyche-pop stance, whilst ‘What’s It Like’ stomps some sing along soul.

Side 2’s ‘A Mad Affair’ takes you punting around the Chris Free lake of care-free psyche-pop – think John Barry meeting Syd Barrett on the  Norfolk Broads. ‘Refections’ imagines the opening scene of a typical 60’s English film, possibly driving along the mountains in a classic convertible.

The forty-fourth release on the Spinout Nuggets label, this will mostly be available via www.spinoutproductions.com/shop/, the band and all good record outlets worldwide. 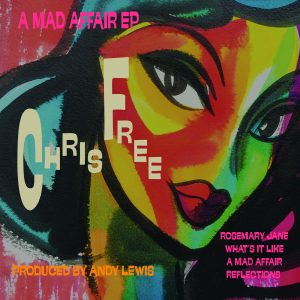