Side A – Bandana Breaks
Side B – Funk Off

Side A – Bandana Breaks
Side B – Funk Off

Who are Espadrille? We may never know. What we do know is that this circular disc, of seven inches in diameter, holds two circular grooves with two heavy hitting bongo-hammond-funk musical wonders! Written and performed by T.Montana and H.Shand, these tracks were laid down in a studio session where musical magic was formed. Are Espadrille musicians? Are they magicians? Are they technicians? Well, all we know is that they provide munitions of musical magical nutritions. So eat up!

Espadrille was formed many, many moons ago, and have been making and performing music in various outlets for over three decades. As Espadrille, they remain in a studio, posted on the Starship Espadrille, firing out funky bass-lined, bongo beaten, fuzz-guitar-wah, hammond-fired Funk, R&B and Breaks.

Limited to 300 hand-numbered copies, Bandana Breaks kicks it all off on Side A with an intro that sets the scene – then the organ kicks in! There’s a feeling that the band enjoyed putting this one together. Funk Off fills Side B, bongos scouring corridors, tip-toeing through, then…….there it is! Pace raised to the end.

Will we see more from Espadrille? Maybe not physically, but you’ll hear more, and you can bet they’re making more magical musical wonders as we speak.

The ninth release on the Spinout Nuggets label, this release is available via www.spinoutproductions.com, and all very good record outlets. 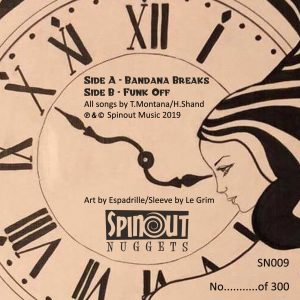 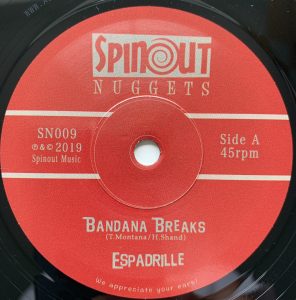 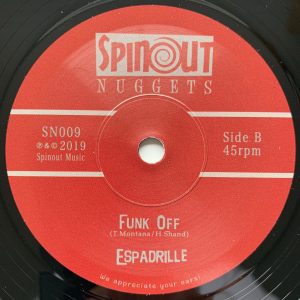 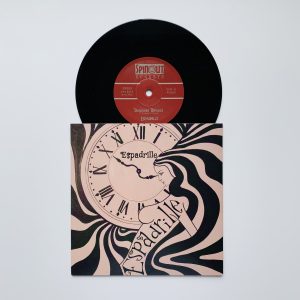