Graham Day – The Memphis Train / Girl (You Captivate Me) 7″

Release – The Memphis Train / Girl (You Captivate Me)

*Please note that due to an estimated delivery date from the pressing plant, these possibly won’t be sent out until early November, or before*

Release – The Memphis Train / Girl (You Captivate Me)

Side A
The Memphis Train
Side AA

Girl (You Captivate Me)

Graham Day has been writing, recording, releasing and performing music since 1980, starting out with legendary 60sGarage/PowerPop band The Prisoners (alongside Allan Crockford, James Taylor and Johnny Symons).

Since releasing their debut album in 1982, The Prisoners made a huge dent in the live music scene, from Medway to the darkest, dingiest live venues around, including an appearance on Channel 4’s ‘The Tube’.

The Prisoners disbanded around ’86 (apart from a re-gathering in the 90s), but Graham has since continued his art in The Prime Movers (1989-93), The Solarflares (1999-2004), Planet, Graham Day & The Gaolers (2007- present), Graham Day & The Forefathers and The Senior Service (2016-present), along with performing in Thee Mighty Caesers and The Buff Medways with his old chum Billy Childish.

Both of these tracks were recorded as part of a series of themed covers nights; home videos temporarily replacing what were originally ‘live open mic’ nights held at the Rochester Social Club, Medway, Kent. Graham rarely records ‘covers’, preferring to write his own songs in the bands he’s been in, however, with no outlet for live gigs or new band recordings in the COVID-19 climate he was forced to capitulate, and reluctantly admits “it was fun”.

Initially recorded at home, ‘The Memphis Train’, originally recorded by Rufus Thomas, was aired on the 26th September 2020 as part of the ‘Town and Country’ theme, whilst ‘Girl (You Captivate Me)’, originally recorded by ? and the Mysterians, was aired on the 14th November 2020 as part of the ‘Boys v Girls’ theme. These tracks were also cut into a limited edition lathe cut 7”, and released on Spinout Nuggets in 2021. They have now been tweaked and mastered for vinyl.

The sixty-fifth release on Spinout Nuggets, this record will be available via the label and all very good record outlets. 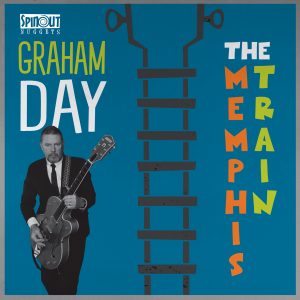