Side A
Oil And Colour Man
Side B
Saturday Afternoon

Side A
Oil And Colour Man
Side B
Saturday Afternoon

Groovy Uncle is the brainchild of Medway based songwriter Glenn Prangnell (The Offbeats, The Kravin A’s, Goodchilde). The project began around the dawning of the new millennium when Glenn found himself at a loose end, creatively. His previous band, Goodchilde had recently disbanded after five or so years of gigging and recording and while the other members were busy working with a number of projects, Glenn had an empty diary. Songwriting had always been his top priority so he carried on doing exactly that for the next few years until, in the mid Noughties, the world hit the My Space age and with this in mind he uploaded some of his home recordings of brand new songs to the site with no plan to record or release anything ‘properly’. But, a number of encouraging comments regarding the new material were gratefully received, and the rest is history.

Nine studio albums in, with countless contributors, Glenn continues to release the Groovy Uncle discography through his own record label, Trouserphonic Records. For some time, Spinout Nuggets have wanted to release 2017’s ‘Oil And Colour Man’ (from A Clip Round The Ear album) on a 7″, and it’s perfect timing now to pair it up with ‘Saturday Afternoon’ (first time on vinyl) from 2021’s ‘Searching For The Grown-Ups’ album.

The forty-eighth release on the Spinout Nuggets label, this release will be available via www.spinoutproductions.com/shop/ and https://trouserphonicrecords.co.uk/trouserphonic-shop only. 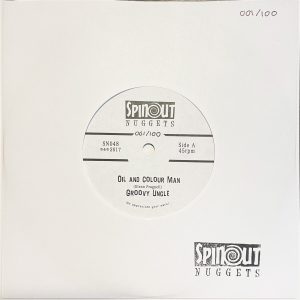