The Hurricanes – Keep On Pushing Til The End 7″

The Hurricanes are a loud Mod Garage band, bringing the sound of ’66 to now! Fusing Power Pop, 60s Garage, Mod Revival and Boss British Beat, these four gents have been around the block, starting out playing covers as their forefathers did, inevitably leading them on to writing, recording and performing their very own material.

Since self-releasing their debut album ‘Let’s Go!’ in 2018, The Hurricanes have since released the pounding single ‘Look Out! / Shake It!’ (2019) and second album ‘Look Out! It’s The Hurricanes’ (during the lockdown of 2020) on Spinout Nuggets, all receiving much interest and speaker bounce throughout.

The band have forthcoming gigs supporting The Primitives (Cambridge), The Len Price 3 (London) and Graham Day & the Forefathers (Medway), along with the Boomfest Alldayer (London).

Side A’s ‘Keep On Pushing Til The End’ is a song of optimism, and seeing the light at the end of the tunnel; something much needed in these times of trouble. Firing on all four from the start, with a catchy chorus that’ll have you singing along (and imprinting your mind for the rest of the day), could this be the best from the band so far?

Side B’s ‘Take A Ride Tonight (Organ Mix)’ is an organ-added version of the album opening favourite of the same name.

Don’t expect smooth polished studio efforts here; feedback squeals, amp hums, drums pound and the edges of distortion are all deliberate – this is the sound of The Hurricanes! 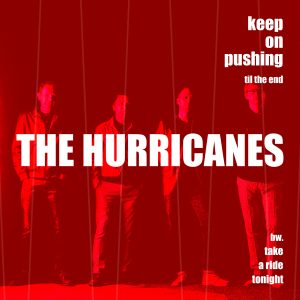