The Link Quartet – The Saint-Tropez Heist 7″

Side A
The Saint-Tropez Heist
Side B
Nizza Connection

Side A
The Saint-Tropez Heist
Side B
Nizza Connection

The Link Quartet formed way back in 1993, and over the years have built a worldwide reputation and have become a most distinguished band related to the Hammond organ sound.

Italy based, The Link Quartet have produced a unique mix of Funk, Beat, Rock and Soul, strongly tied to the glorious bands of the past, but fully looking forward towards the future for a modern unmistakable touch. The band have consistently worked hard in the studio, and have released ten albums, several singles and EP’s, and appeared on some heavy weight compilations throughout the last two decades, working with labels such as Acid Jazz, Record Kicks, Hammond Beat, Sony, Soundflat and many more.

On the live side, the band have performed almost all over the world, sharing the stage with artists such as Brian Auger, The Music Machine, Manu Chao, Sharon Jones & The Dap Kings, Charles Bradley, Big Boss Man and more, and have also performed at various festivals globally.

In November 2018 the band decided on the idea to release a live album recorded in the studio, during a three-day event. The event took place at Tanzan Music Studio, which resulted in the ‘Secret Sessions’ live studio album, containing all the best tracks of the Italian combo, performed live and recorded as never before. The album was released in 2019 on Spinout Nuggets.

The Link Quartet are now back in action with a new single that brings the band back to its sixties roots, this time with a more modern and   cinematic perspective. Imagine one of André Héléna stories, set in Côte d’Azur, with a spectacular robbery, car chases and bullets flying all over your head: that’s the A-side “The Saint-Tropez Heist”, a wild up-tempo movement, with a screaming Hammond organ, fuzz guitar and a heavy bass line, also featuring, as guest, the incredible bongo sound of mister “Big Boss Man” Nasser Bouzida.

After the action you can follow the gang into a smoky night club where they chill out sharing the loot, drinking and watching the girls dancing: that’s “Nizza Connection”, a dark and evocative down-tempo groove where the hypnotic drums’ groove sets the base for the organ theme, joined by the Moog synthesizer and the Mellotron to create the right mood for a perfectly fitted B-side.

The thirty-fourth release on the Spinout Nuggets label, this will mostly be available via www.spinoutproductions.com/shop/, the band and all good record outlets worldwide. 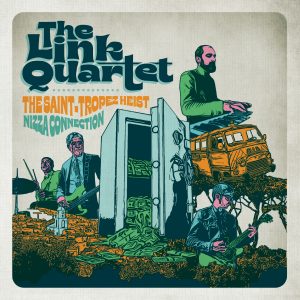