Skip to content
View cart “Armitage Shanks – Look Out Here Comes Uncle John 7″” has been added to your cart.

The Shop Window – The State Of Being Human LP/CD

Release – The State Of Being Human LP/CD

The Shop Window are a four-strong IndiePop/Jangly guitar band, fronted by Carl Mann and Simon ‘Syd’ Oxlee, who gained their first record deal in the mid-late 90s in previous project Westpier, label mates with Sleeper (Indolent Records – BMG). Once Westpier folded, Carl ended up depping on guitar for Sleeper, and round the same time also played guitar for Kylie Minogue, for TV performances, gigs and a tour of Australia, and even co-wrote a track that ended up on a Kylie B-Side in 2000.

Carl recently found himself once again with music in mind. With old friends Martin Corder and Phil Elphee, Carl invited his old friend Syd along and The Shop Window was born! Four digital singles, and a 7” single (on Spinout Nuggets) later, all receiving rave reviews, it was time to make an album.

The State Of Being Human is one big jangly pop cake filled with ingredients that span decades of guitar music, glued together by the unmistakable sound of Carl and Syd’s vocal style harmonies. You’ll hear lots of Creation/C86 and early style 90s influences in here, but the album is freshly forward focused, with their own approach to the classic sound.

This is an album you can get lost in and enjoy the journey from start to finish, as albums were once intended to be. Warmth, nostalgia, joy, heartache and love are just some of the emotions likely to embrace you along the way.

The thirty-ninth release on the Spinout Nuggets label, this release will be available via the label, the band and all very good musical outlets. 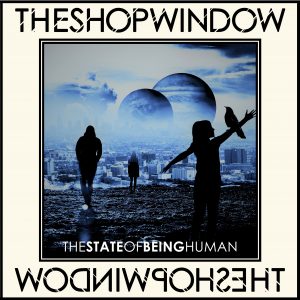