The Treasures Of Mexico – Heart Shaped Clock / Stick With You 7″

Blue Side
Heart Shaped Clock
Bright Side
Stick With You

Blue Side
Heart Shaped Clock
Bright Side
Stick With You

Since the demise of The Dentists in the late 90’s, Mark and Bob, key contributors and founder members, have been busy through a number of side projects and contributions to worthy musical causes, both together and separately, and most recently contributing with The Treasures Of Mexico. With Mark on song-writing duties, in 2018 they released their second album ‘Everything Sparks Joy’ on Shelflife Records to much acclaim, hitting many Best Album Charts at the end of that year. The following year, ‘The Last Thing’, an album track, was released as a single on Spinout Nuggets, with two previously unreleased tracks.

Limited to 300 hand-numbered copies, this 7” release is doubled-up, with a Heart Shaped Clock’ on the Blue Side and ‘Stick With You’ on the Bright Side. With the long musical journey to this day (including The Dentists, Coax, Fortress Madonna, Words Beginning With X, The Great Lines, Echo Heights), it’s not about the journey itself, it’s about what comes through those speakers, and into your lives, no matter how it got there.

The twenty-second release on the Spinout Nuggets label, it will be available via www.spinoutproductions.com/shop/, the band and all good record outlets. 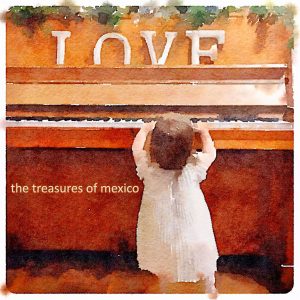 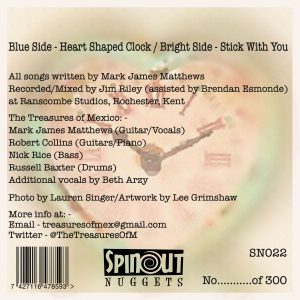