*Please note that due to an estimated delivery date from the pressing plant, these possibly won’t be sent out until early November, or before*

Side A
Miss Understood
Side B

Rope Around My Neck

Wipeout was formed in 1976. Their legendary live performance at Chatham’s Pentagon Shopping Centre in 1978 served as inspiration for many of the Medway-based bands that followed them – the gig being so well attended that many of the traders had to shut up shop early.

Starting out gigging explosive versions of R&B standards, Wipeout released their debut 7” single in 1981; a breath-taking blues stampede through the Sonny Boy Williamson classic ‘Baby Please Don’t Go’. The band soon began to write and perform their very own material, releasing another 7” single and their debut album in ’83. Wipeout clocked up many miles on the gigging circuit, and would often play alongside Blues/R&B bands such as Nine Below Zero and Dr Feelgood, as well as headlining their own gigs. Lemmy was a regular in the crowd at Wipeout’s legendary performances at Dingwalls.

Since the band’s silence (did they ever ‘split’?), vocalist Jim Riley went on to set up his own recording studio – Ranscombe Studios – and also performed in The Herbs, Gurus of The New Millennium and Jim Riley’s Blues Foundation amongst many others, as well as featuring as a regular in Billy Childish’s band The William Loveday Intention. Billy Childish has been recording with Jim since the new millennium.

In 2021, members of Wipeout decided to get together to record a couple of new songs that Adrian and Jim had written. The line-up features Jim on vocals and Adrian on guitar duties, alongside original drummer, Andy Neal. For bass guitar, the band hooked in Darryl Hartley (Alvin Purple, Sergeants Mess, The Senior Service).

The result has been recorded and laid onto two continuous grooves; with ‘Miss Understood’ being a bouncy stomper that will excite any dancefloor, and ‘Rope Around My Neck’ finishing the night off for the slow dance.

The sixty-sixth release on Spinout Nuggets, this record will be available via the label and all very good record outlets. 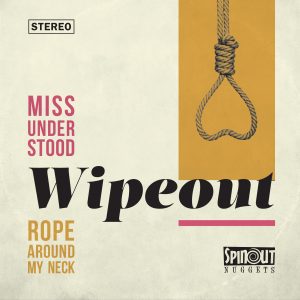