Skip to content
View cart “Various Artists – Spinout Nuggets Chapter 1 : From The Ashes LP” has been added to your cart.

Dreamcoaster are post-punk, noise-pop duo Jane and Andrew Craig, based in Brighton, UK, creating a reputation for their dreamy harmonies, strong melodies and fuzzy guitars.

In summer 2018, they started writing songs at home and on holiday and wondered what it would take to start a band again, some twenty years after their last one (Luminous).

The pair soon established their style, combining catchy reverb-drenched female vocals, thoughtful lyrics, strong melodies and bold guitar hooks. With an obsessive interest in 80s/90s indie music, the duo were always going to take influences from the past and reshape them into their own sound. They have since released a number of well received singles and albums, in various formats.

During the lockdown period of 2021, the two-piece became four, with Ian (drums) and Becky (bass and vocals) joining and performing a string of live shows.

Their first single release on vinyl, this 7” EP provides a good spread of Dreamcoaster sound.

Side A kicks off with ‘Step Outside’, a timely song about being blown away by nature’s beauty.

Side B starts with ‘I Want You’, a cheeky unrequited love song, followed by ‘Wake Up’, a song about sleeping through your alarm clock.

The fifty-sixth release on the Spinout Nuggets label, this will mostly be available via www.spinoutproductions.com/shop/, the band members and all good record outlets worldwide.

Catch Dreamcoaster live at a venue near you soon! 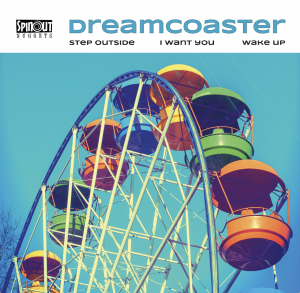