Jim Shepherd is the lead singer, guitarist and songwriter of The Jasmine Minks, one of the first bands to have records released on Alan McGee’s Creation Records, the iconic label that shot Oasis and Primal Scream into superstardom. The Jasmine Minks were also the only former Creation Records band that McGee took with him after his label folded, for his next label, Poptones, home of The Hives.

After several albums and singles with The Jasmine Minks, Jim Shepherd now has his first solo album, backed by an indie supergroup of Dave Morgan (The Loft, the Weather Prophets, Subway Sect) on drums and production, Frank Sweeney (The June Brides) on strings and keyboards and Arash Torabi (The June Brides, The Distractions, Beat Hotel) on bass, with guest vocals by Tommy Reid (The Jasmine Minks), Beth Arzy (The Luxembourg Signal, Jetstream Pony), Aberdeen’s Vapour Trails and Marianne Dissard.

The album’s 12 brand new songs prove that Shepherd’s songwriting is still on fire, with a fantastic production by Dave Morgan, strings, and stunning Beach Boys/Byrds-style harmony vocals. Many moods and styles are captured: it’s a real journey….maan! Dig it!

Creation Records diehards who swooned over The Jasmine Minks’ wonderful Cold Heart, got their Mod kicks to the band’s Where the Traffic Goes, shook their stuff to Dave Morgan’s drumming on Primal Scream’s debut album Sonic Flower Groove or the Weather Prophets’ Almost Prayed ain’t going to be disappointed with anything here.

And you don’t need to be a fan of the aforementioned or even know anything about that whole scene to dig this album. It’s rock & roll, it’s soul, it’s psychedelic, it’s spiritual and it’s good for ya!

The fifty-first release on Spinout Nuggets, this record will be available via the label, the band and all very good record outlets.

Catch Jim and The Pillars Of Creation perform the album live at The Lexington, London on Sunday April the 17th (see flyer below). 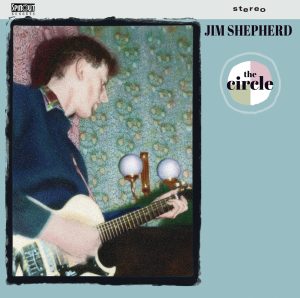 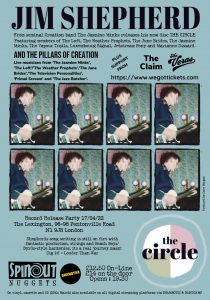