Men From Memphis – Hacksawing The Head Off The Legend 7″ EP

Release – Hacksawing The Head Off The Legend EP

Men From Memphis (sometimes preceded with ‘The’) are a long lost Medway based band who would sometimes support bands such as The Dentists, The Claim and The James Taylor Quartet during their twenty-odd gigs of the time, around all the usual Medway haunts, and London too.

Simon Bunyan had met a chap in Joanna’s Nightclub, Gillingham who turned out to be a drummer, who was also at college with two other blokes, the four gathering to form a band which later moved on to a five-piece forming Men From Memphis. With Simon Bunyan on vocals, Martin Brown on rhythm guitar (formerly of Medway’s The Hyacinth Girls), Andy Burton on lead guitar, Mark Aitken on bass (formerly of Medway’s Let’s Go Naked) and Chris Hearsey on drums, the band were heavily influenced by the C86 sound, with a mix of power pop and jangly guitar.

With only one recording session achieved during their time together, Men From Memphis (none of them from Memphis) eventually dispersed. Simon and Mark now purvey musical wonders in These Guilty Men (Mark is also with The High Span and Ye Ascoyne d’Ascoynes), and Chris is with Sergeants Mess (and many more), with lots in-between too.

Hacksawing The Head Off The Legend EP was a four-song collection, recorded in March ’89 at Red Studios, Kent. Here we have three of the four tracks, the fourth to feature elsewhere.

Side A’s ‘Sigh’ is an intense, driven stomper, providing over six minutes of a musical masterpiece. Side B opens with ‘Move Me & Shake’; full power pop, which could easily have been recorded several years earlier during the ModGarage/PowerPop heyday. ‘Somewhere’ ends the EP, which certainly confirms Men From Memphis to the list of jangly bands of the Medway Delta.

Limited to 300 hand-numbered copies, these three tracks are very nicely  gathered to remind us of the good things from Men From Memphis.

The forty-seventh release on the Spinout Nuggets label, this will mostly be available via www.spinoutproductions.com/shop/, the band members and all good record outlets worldwide. 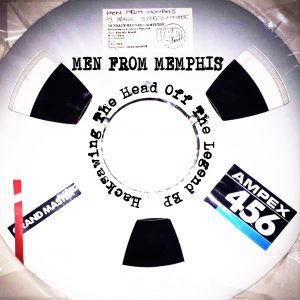