Paul Groovy & The Pop Art Experience are a garage-rock band who formed in the early ‘80s, performing with the likes of The Jesus & Mary Chain, The Pastels, The Mighty Lemon Drops, The Shop Assistants, The Prisoners and The Cannibals. The Groovies have had previous releases appearing on Cherry Red Record’s C86 – The Deluxe Edition, 3CD Boxset.

Singer Paul Groovy was part of the early Creation Records scene, helping Alan McGee hand-fold and wrap 7″ singles and chronicling that early scene in his Groovy Black Shades fanzine (hence his Paul ‘Groovy’ moniker, given to him by McGee himself). Paul also sang with the Creation house band backing him at legendary venues like The Living Room and Ambulance Station.

Paul and guitarist Steve also have their own radio shows, drummer Jane was in The Green Hornets and Tone E wrote the book Twenty Missed Beats. It’s a very groovy garage band indeed!

Limited to 300 hand-numbered copies, the band use Beatles harmonies and key changes, and with their stand-up girl drummer, they have often been compared to The Velvet Underground. They add 70s Punk sensibility to a 60s Paisley Underground vibe.

Side A’s ‘He’s A Liar’ packs a hard punch with a swing, and Side B’s hard-hitting version of ‘You’re Gonna Miss Me’ propels you to the 13th Floor, with The Groovies doing what they only know best.

The band have recently supported, and were due to support (COVID-19 to thanks there), The Godfathers, Shonen Knife, Giuda, The Total Rejection, The Courettes and Wendy James, and were due to play some of the UK’s festivals this summer as well as a prestigious slot at The Primitive Club, London in August.

The eighteenth release on the Spinout Nuggets label, this release will be available via www.spinoutproductions.com/shop/, the band and all good record outlets. 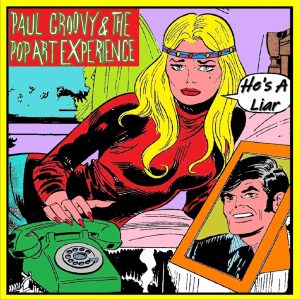 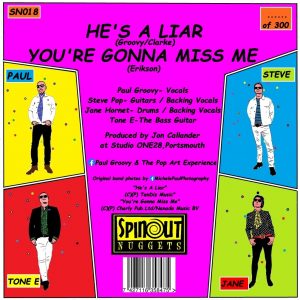