Skip to content
View cart “The Embrooks – Human Living Vampire / It’s Time You Realised 7″” has been added to your cart.

Tapioca Tundra is a collaboration between Mary Wyer/Julian Knowles (Even As We Speak) and Beth Arzy (Jetstream Pony, and The Luxembourg Signal). The idea came about when bands Even As We Speak and Jetstream Pony were due to share a stage in London in March of 2020, and with Mary and Beth both being big fans of The Monkees they had planned to gather on stage for a cover. Sadly the pandemic hit, which cancelled said gig. But like many, long distance task recording methods were employed to allow the collaboration to continue in the form of an audio recording (and accompanying video).

Both Even As We Speak and Jetstream Pony (and The Luxembourg Signal too) released albums in 2020, during a very trying time, but with raving reviews.

Sounds Incarcerated is the noise made when two married musicians (Viv Bonsels and former Prisoner(s) Allan Crockford) are unable to record or perform with their regular band, The Galileo 7. Over the course of the pandemic they recorded many cover versions and accompanying videos for a regular local themed online ‘open-mic’ event. Although the songs were initially recorded just to pass the time and entertain a small bunch of friends, the reaction was so positive that an album was swiftly put together – ‘Unswitchable Hits Vol 1’ was released at the beginning of 2021. This version of The Monkees ‘Porpoise Song’ was recorded for the ‘Animal Magic’ theme night in Feb ’21, and will feature on Vol. 2.

The forty-fifth release on the Spinout Nuggets label, this will mostly be available via www.spinoutproductions.com/shop/, the band and all good record outlets worldwide.

Don’t forget to check out Even As We Speak, Jetstream Pony, Sounds Incarcerated, The Galileo 7 and The Luxembourg Signal to hear more from the artists involved in this marvel!

Side A produced, engineered and mixed by Julian Knowles (Beth Arzy vocal recorded by Ian Catt).
Side B is a Franc Localdork production.
Published by Spinout Music.
Illustration/artwork by Darryl Hartley. 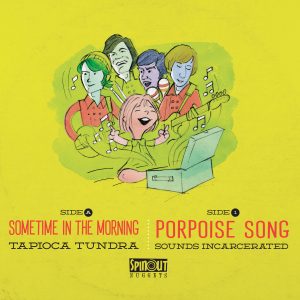