The Embrooks have been providing the finest blend of hard Garage, Freakbeat and Psychedelia since late ’96, putting a mid-late 60s stamp on the now!

Consisting of Lois on drums (at some point also in The Dirty Burds, The Lyds and Thee Jezebels), Alessandro on guitar/vocals (also previously in Head And The Hares, and a few other projects) and Mole (at some point also with Stewed, The Higher State, The Mystreated and The Lyds, but now also making noise in The Baron Four, The Jack Cades, The Galileo 7 and sometimes Groovy Uncle). Mole is also head buff at State Records and North Down Sound Studio. Lois and Alessandro are also one half of Odd Men Out!

As The Embrooks, the trio have released a number of singles and albums during their time, and have found themselves in numerous tours around the UK and Europe, and even further afield to the USA and Canada too, appearing at legendary events such as Las Vegas Grind, Wild Weekend, Purple Weekend, Cavestomp and more!

For this single release, ‘Human Living Vampire’ kicks things off, a track originally found on the last studio album, with the exception of this version being a special Mono Mix, treated specifically for the single release. On the flip, the band’s cover of ‘It’s Time You Realised’ blasts the roof off in true (The) Embrooks fashion!

The thirty-third release on the Spinout Nuggets label, this will mostly be available via www.spinoutproductions.com/shop/, the band and all good record outlets. 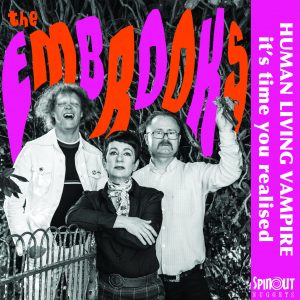