The Galileo 7 – Listening To The Colours Mini-LP

Release – Listening To The Colours

The Galileo 7 are a Kent-based quartet who have been kicking out high-powered psych-pop nuggets since 2010, over the course of seven albums and several 45s.

Vocalist/guitarist/songwriter Allan Crockford’s history includes stints as bassist with The Prisoners, The James Taylor Quartet, The Prime Movers, The Solarflares, and more recently Graham Day & The Forefathers, amongst others. With Viv Bonsels (Allan’s partner in crime, in life and in duo Sounds Incarcerated), Paul Moss and Mole (also The Embrooks, The Baron Four and The Jack Cades), these four know how to make a good record.

The origin of this ‘new’ release lies in the band’s second album ‘Staring At the Sound’, released in 2012. For various reasons the band came to feel that the album didn’t live up to their expectations, despite having some good songs on it. They would talk occasionally about re- recording the songs, and indeed a couple were tackled on the almost- live-in-the-studio collection ‘Live-O-Graphic’ in 2016.

With the arrival of the pandemic in 2020, in common with musicians all over the world, the band found themselves isolated from each other and looking for a way of maintaining some sort of creative relationship. While there was no way of working in the same room on new material, they did find a way of recording remotely and realised they had that set of decent songs from the unloved second album waiting to be improved…

‘Listening To The Colours’ is the result; a six-track mini-album that proves it really was worth going back over and getting it right second time round – with the benefit of nice loud 45rpm cut on 12inch vinyl!

The fifty-fourth release on Spinout Nuggets, this record will be available via the label, the band and all very good record outlets. 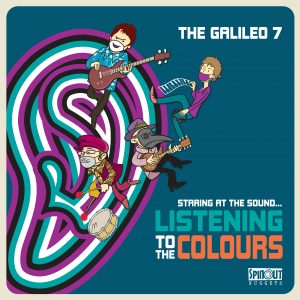