The Hannah Barberas – Party From Hell 7″

Side A
1.Party from Hell
Side B
1.Love’s Coming Back In Fashion
2.Puppet Show

Side A
1.Party from Hell
Side B
1.Love’s Coming Back In Fashion
2.Puppet Show

The Hannah Barberas are a four-piece band, united by a love of mid-80s Indie, and fuelled by a DIY ethic.

They began in mid-2018 with the release of their well-received debut digital EP ‘The Hannah Barberas Are Here at Last’ which, to the band’s amazement, found an audience.

Thrilled by the response from blogs and radio, including regular support from Gideon Coe (BBC 6 Music) and The Undertones’ Mickey Bradley (BBC Ulster), the band released their debut long player, ‘Into the Wild’ via Spinout Nuggets in March of last year.

Everything’s turning around, can’t you feel it?!

The Hannah Barberas are BACK with three sprightly new songs, recorded in the brief window between lockdown 2 and 3.

‘Party from Hell’ delivers the trademark male/female harmonies andjangling guitars, atop the band’s most danceable groove yet.

The South East London foursome have brought out the bells and whistles (literally) for this, their first 45. So grab a drink, head into the garden, and dance till the sky turns red!

Just so happens that this release will be on red vinyl!

The thirty-fifth release on the Spinout Nuggets label, this will mostly be available via www.spinoutproductions.com/shop/, the band and all good record outlets. 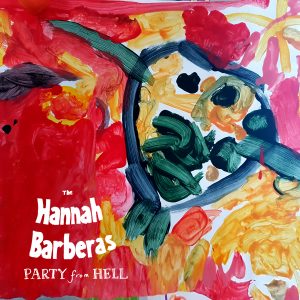