Side A
1.Take A Ride Tonight
2.Trapdoor
3.Right Down Inside The Blackout
4.Baby Move On
5.Don’t Hold On

Side B
1.The New Contenders
2.One For Sanctimony
3.Dancing On The Rubble
4.Look Out!
5.Running Out Of Time
……and We Ride On

The Hurricanes are a loud Mod Garage band, fusing Power Pop, 60s Garage, Mod Revival, Soul and Boss British Beat. These four gents started where many of their forefathers did, think The Who, The Creation and The Prisoners, moving on to writing and creating their own sound, and recording it too.

Starting with their own ‘Is There A Why In Your Mynd’, mixing 60s Garage Fuzz with stomping Soul Big Beat, backed with a raucous live recording of The Eyes’ ‘I’m Rowed Out’, followed by their long awaited debut album ‘Let’s Go!’, which received rave reviews. Last year’s single ‘Look Out!’ b/w ‘Shake It!’ was released on Spinout Nuggets, and the band’s first outing on vinyl, and it made pure sense to extend this to an album release.

Limited to 300 hand-numbered copies, ‘Look Out! It’s The Hurricanes’ fires up the cones with ten stompers. Starting with ‘Take A Ride Tonight’ (almost a message) storming through to ‘Running Out Of Time’ (another message?). Feedback squeals, amps hum, drums pound, and the edges of the sound distortion are deliberate. This is the sound of The Hurricanes. The Hurricanes have played some hot gigs during the last couple of years, and intend to blast roofs all over the land!

The nineteenth release on Spinout Nuggets, this release will be available via here, The Hurricanes own website and all good record outlets! A CD is also available too (and digital elsewhere). 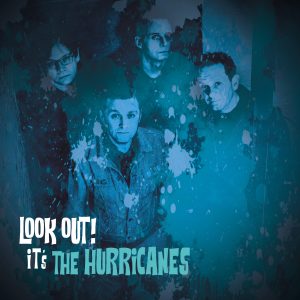