The Mindreaders are Richard Ipaint on vocals and drums, Sexton Ming on vocals, sfx and guitar, and Russ Wilkins on vocals and guitar, with all three on songwriting duty too. Fans of The Pop Rivets, The Milkshakes, The Natural Born Lovers, Rocking Richard, The Delmonas, Auntie Vegetable, The Wildebeests and more will know all about them.

The Mindreaders were formed in the wake of Len Bright Combo. Once Bruce Brand had departed, Richard Ipaint sat in the throne, forming a more primitive sound for the Combo. Once Eric decided to stop the Combo, both Russ and Richard wanted to continue with the sound they was enjoying, and was simply needing a rhythm guitarist. With a hundred guitarists to choose from in Medway, there was no-one better to take the rhythm slot than Sexton Ming. Russ had previously worked with him on other projects, and always admired his offerings.

With a borrowed drum kit, a Vox Defiant, a Framus Nashville and a Les Paul copy, the trio recorded onto the same Revox G36 valve recorder that Russ had used for many of The Milkshakes, The Prisoners, Len Bright Combo, Sexton Ming and Billy Childish albums, utilising the same distortion method heard on those recordings. Ban The Mindreader was released in 1987 on Russ’ Empire Records label, with some extra gig recordings to bulk it out. Some of the gig recordings also found their way to the Medway Powerhouse compilations on Hangman Records. Gigs happened around Medway and at the Clarendon.

Fast forward 30 years, Russ and Richard realised they only lived 25 miles apart in Scotland, and now much wiser, a connection was made from Sexton (now also much wiser) who wanted to do something dim and simple. A gig was arranged in Hastings which led on to more gigs, including 100 Club, Moth Club, Franklin Fest and more!

Following on from the gigs, they convened in a garage and recorded some songs over two days onto a Tascam 8 track, 1/2” recorder, playing whatever they felt worked, recording over twenty tracks, with a couple of extra contributions too.

And here we have eleven of those recordings, provided to you in the way that The Mindreaders wanted. It’s what all bands should do!

The forty-second release on the Spinout Nuggets label, this limited release of 300 is be available via the label, the band and all good musical outlets. 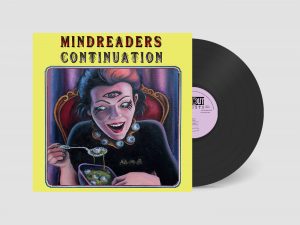 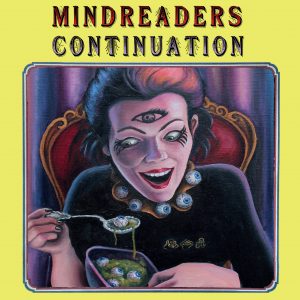