The Senior Service are a quartet of long-time friends, each appreciating the Hammond organ sound of yesterday, giving it a taste of today, fully looking to tomorrow.

With three singles, two albums and a new mini-album out now, each of The Senior Service have been through a long journey – with Jon Barker (The Daggermen, Sergeants Mess, The Buff Medways and more), Graham Day (The Prisoners, The Prime Movers, The Solarflares, Thee Mighty Caesars and more), Darryl Hartley (Phaze, Sergeants Mess, Alvin Purple and more) and Wolf Howard (The Daggermen, CTMF, The James Taylor Quartet, The Solarflares and more).

This twin-spin, 7” single release is based on the live side of The Senior Service. First up is a fine take on the Booker T & The MG’s classic ‘Hip Hug-Her’, the result of a lock-down, online open mic themed event, curated by Mr Unswitchable. The theme for this particular event was ‘Body Parts’, in January 2021, recorded straight to a handheld device, at the Barker Studio; the audio has now been mastered for the vinyl release.

On the flip, originally released on the band’s debut album, ‘The Girl In The Glass Case’ from 2016, this version of the band’s original ‘Bone-Jacked’ was recorded at the live Homespun event at Sun Pier House, Medway in 2016, also mastered for the vinyl release.

The fifty-fifth release on the Spinout Nuggets label, this will mostly be available via www.spinoutproductions.com/shop/, the band members and all good record outlets worldwide. 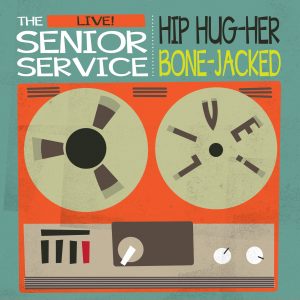