Side A
Spaceman
Side B
1.In My Mind
2.Way Down South

Side A
Spaceman
Side B
1.In My Mind
2.Way Down South

They’re back! But they never went away! Throughout everything that’s recently happened, The Veras have kept busy making new sounds, and are now ready to share them with the world, starting with this seven-inch wonder.

The Veras are four fellas making music inspired by all the great music from the 50s right up to about 5 minutes ago, especially Glam Rock, Punk, New Wave, 90s Indie and BritPop, bringing back the buzz of going to see your favourite band live. These four fellas have been gracing musical stages together in another form for over a decade, but now’s the time for The Veras!

They just managed to get their first two live shows in before the pandemic restrictions kicked in last year, the first supporting Glen Matlock & Earl Slick, the last being at 229 Club, London, to a very appreciative audience. they got a few more in between lockdowns. Since the launch of their first four-track CD EP at the 229 Club gig, The Veras have since released the single ‘Paper Cup Telephone’, which sold out in a blink, so a repress was put in place to feed the hungry!

The Veras third release, here we have three tracks, with Side A firing up with title track ‘Spaceman’, which pounds through, fusing all your favourite sounds into almost three and a half minutes of fun. Side B hosts both ‘In My Mind’ (first time on vinyl since it’s first outing on the ‘Sevens & Nines’ CD EP) and ‘Way Down South’, a ragtime offering proving that The Veras are full of many surprises.

This is the sound of the future, with the past and the present in mind!

Give ‘em a whirl! 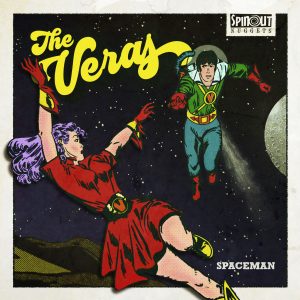