The Veras – V For Veras LP

The Veras are four fellas making music inspired by all the great music from the 50s right up to about 5 minutes ago.

After packing in playing their own stuff to form a tribute band, quickly establishing themselves as one of the most highly regarded and in- demand tributes out there, playing shows all over the country and across Europe, backing soul legend PP Arnold on numerous occasions and having rock legends Kenney Jones (Small Faces, Faces, Who) and Glen Matlock (Sex Pistols) getting up to play with them on numerous occasions too, before they knew it, all sorts of folk were urging them to put out their own material again. And so, after a 15 year hiatus, they have! And it’s going down a storm. And their second-ever gig playing their brand new material was with the aforementioned Glen Matlock and long-term David Bowie collaborator Earl Slick!

With the dreaded covid ensuring no more shows being booked, the four Veras fellas kept on writing, and as soon as they could, recording. More songs were released generating much airplay and positive reviews in the national music media which describes the band’s music as ‘hard-edged melodic Britpop’ and likening them to groups as diverse as The Small Faces, Manfred Mann, The James Gang, The Prisoners, Supergrass and Blur.

The Veras’ debut album is here! The influences of those groups, and so many more, are apparent in the collection of 12 songs that make up their debut long player release: V For Veras. It’s a diverse collection that’s for sure, one that reflects the similarities and differences in the individual players’ tastes, whether that’s rock ‘n’ roll, folk, freakbeat, psychedelia, glam, punk, new wave, indie or something else – it’s all there, fused together to create a unique, identifiable but kaleidoscopic Veras vibe. 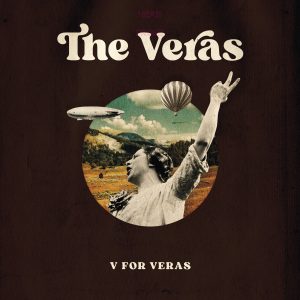