Since 2016 they’ve had the dance-floors twistin’-and-a-shakin’ at some of the UK’s premier Garage, Surf and Beat events such as The Franklin Fest, Beatwave, the Blast-Off! Festival – even King Salami’s after-party!!

The girls play rip-roaring rock ‘n’ roll that is Guaranteed to Bewitch you™ and watch out for the twang – it’s not just from their guitars!! They aim to bring big knickers back, and you may even be lucky enough to catch a pair if you see them live.

Originally Recorded in February 2018 by twiddle-expert and beat stalwart Angus McPake at his Ravencraig Studios, the tracks have recently been back in for a further Fridays/McPake tweak, in readiness for the vinyl release.

On this limited hand numbered 7” vinyl release of 300, The Love Witch (inspired by the 2016 Anna Biller film of the same name) charms her unsuspecting victims until, oops – they’re dead! ‘Shake-Shake!’ is an ode to go-go girls everywhere, and ‘Too Much Of A Good Thing’ – not yours, never was buddy!

The fourth release on Spinout Nuggets label, this release is a dance-floor groover and a big knicker mover!

Keep a look out for Thee Girl Fridays at a venue near you very soon! 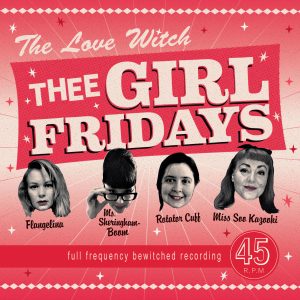 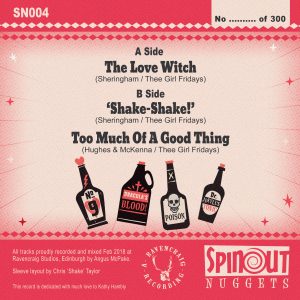 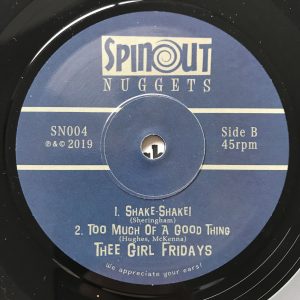 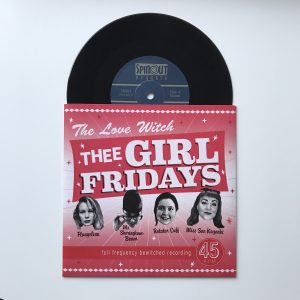