These Guilty Men – The Quiet One LP/CD

Release – The Quiet One LP/CD

These Guilty Men could well be described as a Medway supergroup! With Simon Bunyan on vocals/guitar (Men From Memphis and others), Stuart Turner on guitar (Stuart Turner & the Flat Earth Society and others), Mark Aitken on bass (The High Span, Ye Ascoyne d’Ascoynes and others) and Rob Grigg on drums (The Dentists, Coax and others).

Taking influences from the likes of Richmond Fontaine, New Order and Echo and the Bunnymen, amongst many others, These Guilty Men formed in 2012 as a result of Simon wanting to be in a band again, so he learnt a bit of guitar and wrote some songs. Somehow, he managed to convince Mark to join him too. While others fell fowl of being rock’n’roll enough, Rob happened to overhear Simon in a pub saying he needed a drummer (it’s where all the best drummers are found), so he joined in to tighten it all up, with Stuart joining after being piled up with booze, and thus volunteering his services. Yeah, sounds like a story down the pub……….

This is a band of musical appreciators and listeners, making an amalgamation of the music the band individually absorb and listen to that is stronger than the music they could ever do on their own.

The Quiet One is a collection of songs based around memories. Memories of love, loss, regret, anger, and ultimately reconciliation. It’s the tale of two, but could just as easily be the tale of any of us. An album that is set in motion by recollection, full of vivid characters and landscapes, it will take you places and either leave you there or bring you back to those you have known.

Influenced by, and falling somewhere between, the stylings of 80’s new wave and Alt. Country, These Guilty Men a (Mark Aitken, Simon Bunyan, Rob Grigg and Stuart Turner) each has lifetime of experience in making music. Having carefully blended every element of these songs, they can now be presented to new audiences in two lovely continuous grooves, spread across white vinyl.

The thirty-eighth release on the Spinout Nuggets label, this will be available via the label, the band and all very good musical outlets.

This Year It’s Our Year! 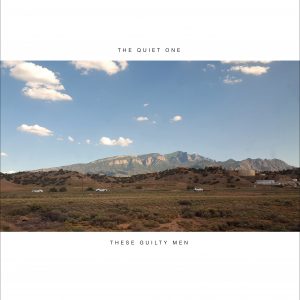